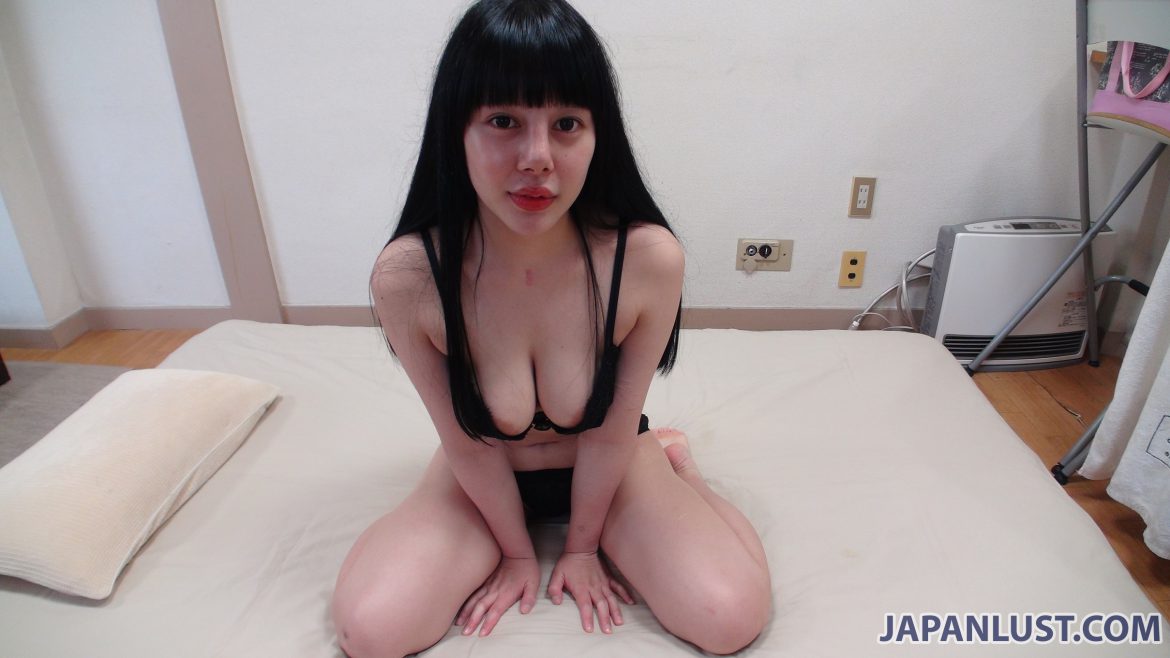 A messy apartment surrounds busty Asian teen Akiho Tanigusa as she speaks with Japan Lust. She’s gotten her pussy nice and shaved for this man’s lucky cock to stretch it beyond his wildest dreams.

Not much different from your typical teenager nowadays, her hobbies are the basic “food and travelling”. She describes herself as outgoing “my pace” type of person.

When it comes to the naughty stuff, she’s not much different than most other Japanese women either. Submissive, and likes to be treated rough.

Up until recently she was in a committed relationship with a serious boyfriend, but they unfortunately had to break up. We’re not complaining though, if it wasn’t for that breakup, we probably wouldn’t be able to get a taste of those perfect tits of hers.

With no fuck buddy to keep her company while she finds another man, she’s single in every sense of the word.

Her fantasies are all about men violently using her toys to completely destroy her shaved pussy, along with some soft S&M play.

When it comes to cock standards, she doesn’t go easy at all. She likes her cocks big, fat and long.

Position-wise, you’d be better off letting this naughty baby ride on top.

If we’re to revel in the majesty of her big juicy tits, then that cute pink one-piece, along with the racy black underwear beneath it, have to go away.

She calls herself a baibu girl; it’s simply the most effective toy to stimulate her clit.

They never actually use any sex toys when they fuck. The busty Asian teen thinks it’s because her husband is afraid he can’t compete with them.

We ask her to start stripping for us, and she gladly grants our wish.

Once the jacket is off, the true majesty of her big boobs is easier to appreciate. And it gets even better after she unbuttons the shirt itself, revealing her racy black and red bra.

But nothing even remotely compares to the arousing sight of her naked young boobs once she unhooks her bra. She says they’re e-cups, but she’s obviously trying to be humble.

Her panties are dropped and the busty Asian teen exposes her tight shaved pussy. She’s finally to use her favorite toy for our entertainment.

Pushing the vibrating head of the denma straight against her sensitive clit, she quickly starts to twitch and moan as the stimulation sends shocks of pleasure through her body.

Akiho loses control of herself, and piss comes flowing out as she approaches a sensational climax.

Now that she needs to clean herself after the amazing feeling led her to pissing, the busty Asian teen hops in the bathtub.

Her pretty mouth rotates between licking and sucking while her hand is working the shaft. The cock is turned rock hard and happily red in no time.

Apparently, she equally enjoys pleasuring her man and getting pleasure herself. She also likes her tight shaved pussy to be pounded just right, not too rough, not too soft.

The busty Asian teen is soon done with the bath, but not remotely done with his cock. They head to the bad to get down to business.

Back to swallowing the cock, now even deeper, she lewdly slurps as her luscious lips slide all over the rod. Making sure to use all her assets, her slick tongue goes for many lascivious licks.

What a ball-busting technique, running her pink lips up and down the shaft while rubbing the tip with her finger. The guy is going out of his mind.

Finally getting his hands of those gorgeous big tits of hers, he squeezes them and sucks on the erect nipples as if it was his last moment on this earth.

In order to prepare her tight shaved pussy for what’s to come, he mercilessly ravages it with his mouth. Sucking on the lush pussy lips while his tongue reaches deep into the lustful hole.

There’s no way he can keep this going any longer though, he has to drill this perfect busty Asian teen before her sexual prowess brings him to his inevitable limit.

Not needing to change her position, he teases her anticipating pussy before shoving his cock balls deep. And with no regard for pacing, he thrusts as fast as a madman right off the bat, making her plump tits sensually jiggle.

He helps the nubile beauty up to give her the top position. And is beyond pleased to know just how good of a cowgirl this naughty and busty Asian teen is.

Sliding her pussy on the cock like a true professional, she then leans back and jumping up and down the stiff rod.

But her tits aren’t the only part of her that can bounce. Once she rotates for a reverse cowgirl her delicious big ass is just as sensational.

The busty Asian teen gets off the cock and on all fours. Her man is back inside stretching her pussy.

They end up back in missionary once again, with him stirring her insides harder than ever before.

Forced to finally empty his balls, he fills her tight shaved pussy with his hot seed.