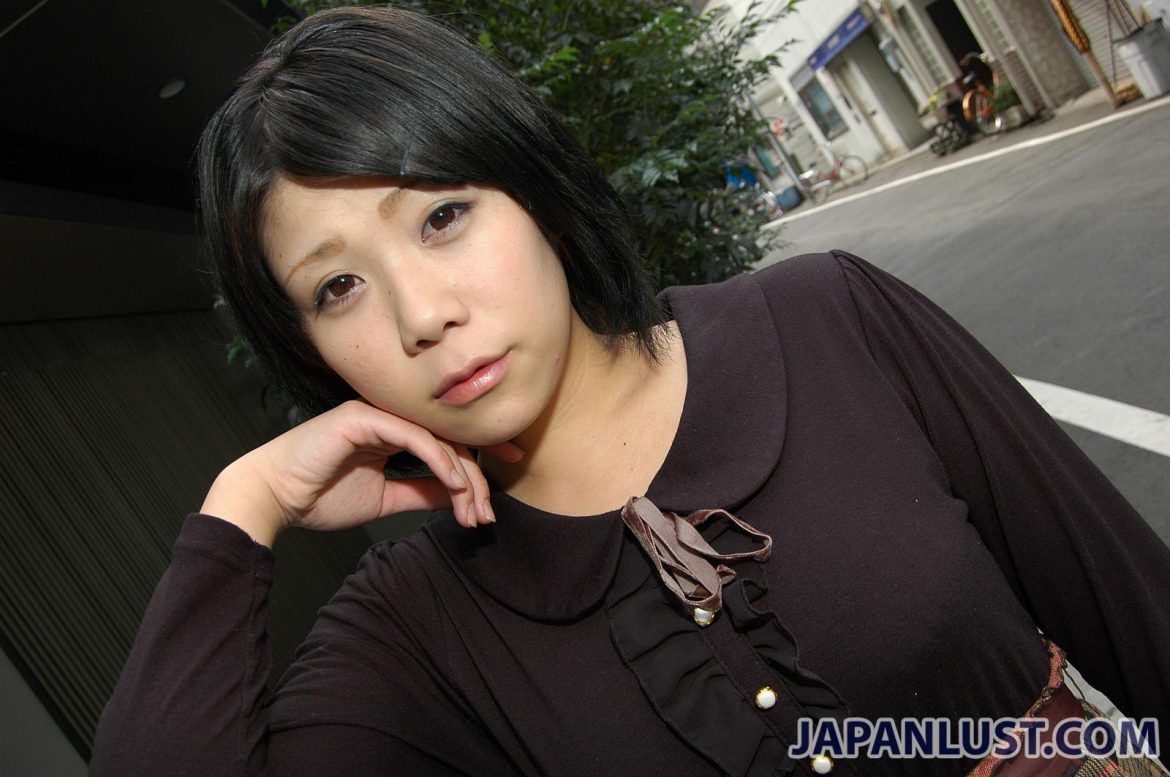 Heart-enchanting Shinobu Igarashi is today’s Japan Lust guest. She’s looking to jumpstart her adult career by doing her first Asian teen sex scene. With a girl as cute as she is, there’s no doubt this career will be long and extremely successful.

But as customs demand, we have to know her story before we stretch her tight hairy pussy.

The stunningly beautiful young Japanese amateur works as a waitress in an izakaya, a Japanese-style local bar. One can imagine how lucky the customers there are, getting served by such a gorgeous babe.

She mainly handles serving beer to tables and cooking. Her old boss is always overworking her, forcing her to carry heavy objects instead of the young male workers.

Despite the unfair treatment she receives, the cutie says she enjoys her job very much, and adorably shows off her little muscles that she’s gotten from being forced to work so hard.

We learn that she indeed has a boyfriend, very much expected, hell almost guaranteed, when she’s this kawaii.

Yet the tone of the conversation unexpectedly shifts once she follows her statement with “but I don’t really like him that much”.

Shinobu says he’s very bossy and controlling, constantly telling her what to do and where to go.

The truth is that her recent negative feelings towards her boyfriend have been influenced by the fact that she found a new guy she really likes.

What makes things even more complicated is what happened on one of the times she was out drinking this new guy along with a few of her friends.

They went back to her apartment, both of them was completely drunk. One thing lead to another, and they wound up having sex. He hasn’t replied to her messages or emails since.

Leaving her troubled relationships behind

Hearing of this complicated love triangle that she’s stuck in, we ask her to do one thing for us. Just completely forget about both of these men.

For the next hour, we want her to fully erase from her mind and thoughts both her ungrateful boyfriend, and her immature crush, along with all her stress and problems, whether coming from her job or personal life.

Simply let loose and take out all her frustrations sucking and fucking a hard cock in front of the camera.

Asked to start stripping for us, she adorably asks “All of it?”. And proceeds to take of her charming white-dotted navy blue one-piece.

Beneath it are her amazing big boobs hiding under a cute pink bra. Shinobu turns around; he drops her skirt and flashes that fleshy soft ass of hers under some lovely panties.

After admiring the scene for a bit, it doesn’t take him long before he continues their interrupted groping session. He grabs both of her perky boobs with his hands from over her bra. Why not go direct though? Let’s get that bra out of the way.

Her naked tits are just perfect, he stands behind her as she gets closer to the camera, then start to squeeze and play with his favorite new toys. Asian teen sex has never looked hotter.

As he teases her erect sensitive nipples, twisting and poking them from every corner; the stunning Japanese girl, shy as she is, can’t stop herself from twirling and twitching in pleasure.

Her man gets on his knees to give her plump young tits some mouth action. Constantly switching between licking and sucking, his tongue and lips make her go wild as he grabs her waist with his left hand to get her closer.

A man worthy of her body

The king of multitasking sexual activity, his right hand is simultaneously moving between rubbing her hairy tight teen pussy and groping her sexy tits.

Twitching between his arms ever so slightly, her shy muffled moans make her look so cute. Who knew participating in Asian teen sex could feel so good.

He gets up to for some ticket-to-heaven kissing as he continues to rub her pussy.

Grabbing his arms with her hands, she rests her head on his shoulder and pushes her body against his, while his hand reaches under her panties, looking to rub her sensitive pussy. So fucking cute!

The adorable Japanese girl, still wearing her delightful ballet flats, lies down on the couch and spreads her stunning legs.

The sight of her already soaking wet hairy pussy can turn any man’s cock into solid diamond. She puts her hands around the lips and spreads while squeezing her legs. The aroused hole is already overflowing with love juices.  He brings his hand closer to examine everything with his fingers.

It’s not in any Asian teen sex that you find a pussy like this, her man now realizes just how lucky he is.

Stimulating her most sensitive and favorite area, her clit, with his fingers, her shy face shows just how hard she’s trying to hold her lustful moans in. He drags himself up while his fingers keep rubbing her wet pussy, as his mouth sucks on her boobs and pleasures her neck.

Now that he’s gone back on his knees to lick her luscious thighs before having his main course, her wet hairy pussy; the cute Japanese girl can’t hold her sensual sounds any longer. With his tongue ravaging her clit and his fingers on her nipples, this feeling is just too good.

The tight hairy pussy has had enough preparation before getting penetrated. And so, his middle finger immediately goes deep and fast inside the soaking wet hole.

His fingers stirring up her insides so hard, she can’t hold it anymore as it penetrates her faster and faster.

He switches from his fingers to a pink rotor. If you thought her hairy pussy can’t get any wetter, then you’re mistaking this for your regular Asian teen sex.

Petting the shaft before she munches it, she quickly gets both of her hands around the cock’s base.

Bobbling her head as she licks and sucks, this guy’s cock can’t get any harder from stimulation.

And since this not your typical Asian teen sex, the lucky man lies down, and she gets on top of him for some 69 action.

She invites him to penetrate her soaking wet pussy, it’s as ready for cock as it’s ever going to get.

He comes closer, and she surrounds him with her arms; the two begin to lustfully kiss. This romantic spectacle takes this Asian teen sex to a whole new level.

Now turning the babe on her side, he gets behind her and spreads her legs before going in.

He then gets on his back asking her to take the top. She clearly appreciates the initiative, hurriedly sitting on the hard rod and sliding it in and out of her wet hairy pussy before starting to jump on it.

It drips out of her pussy as her delightful smile of satisfaction signals the end to one incredible Asian teen sex scene.