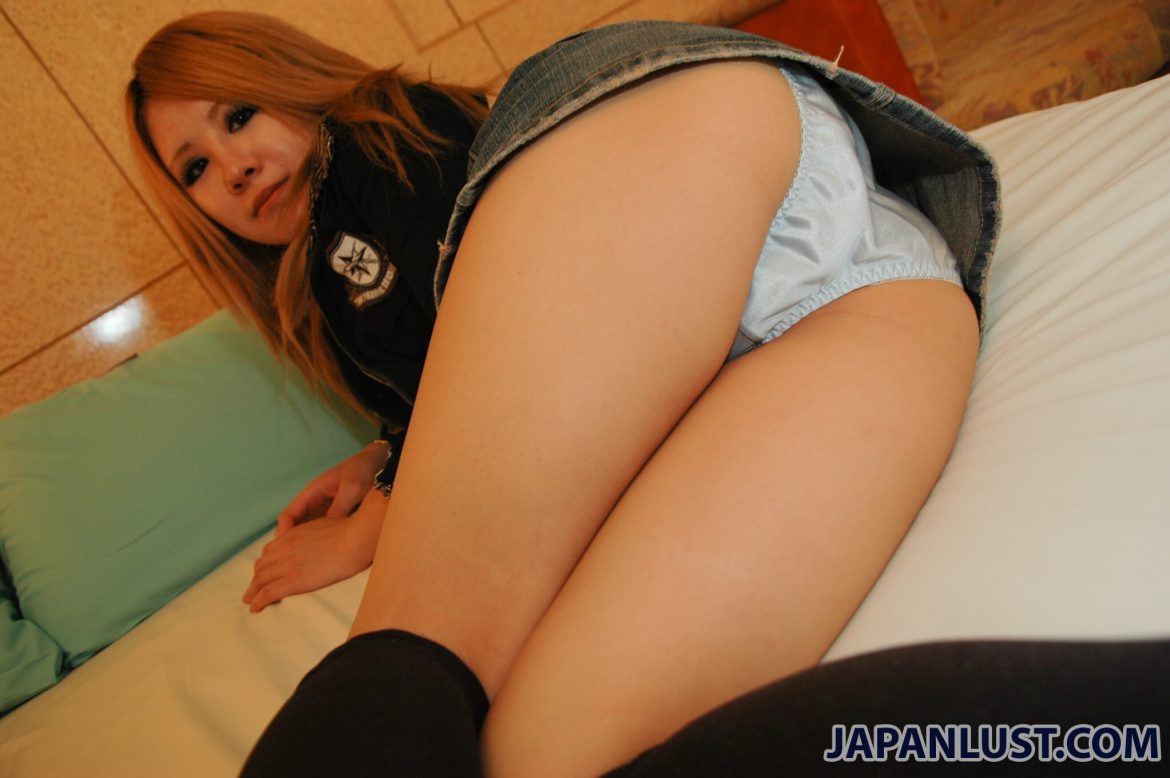 Stunning blonde hottie Nana Mochiduki is taking the day off from her part-time job at a bar, to treat herself to some Japanese girl sex scene. So she came to Japan Lust asking for a lucky man to satisfy her needs.

She’s works as a waitress. And you can tell from her visible panties and insanely arousing thick thighs barely covered by her skimpy miniskirt, that her customers get a feast for their eyes along with their drinks.

For three long years, all the romantic events that are celebrated yearly, Valentine’s Day, Christmas’ Eve, she had to spend them feeling lonely. She really wants a boyfriend to keep her tight body company.

Of course that doesn’t she doesn’t make sure someone is there to pound her hairy pussy regularly. She’s gotten drilled by many of her friends, coworkers, and customers throughout her relationship drought, lucky bastards.

As we’re interviewing her, she receives a call from her mom, but ignores it. The poor woman doesn’t know her smoking hot daughter is going to get her pussy stretched and creampied tonight.

Hot shower for a hot babe

To get things rolling, he invites her for a shower, prompting her to strip.

Starting with her sweater, she reveals her light blue bra covering a pair of firm young tits.

Not giving us nearly enough time to enjoy the view, she stands up and drops down her skirt. Her knee-highs immediately follow.

With nothing but her underwear on, the view becomes ten times more arousing. Those yummy thighs looked amazing before, but now that we can see them in their full glory, they’re just perfect.

Unhooking her bra exposes her gorgeous perky boobs with puffy nipples. The skimpy bikini tan lines on them are not only hot, but also tell us she’s a naughty beach girl.

She follows with her panties; her tight teen pussy has a nice bush above it.

Her delicate nipples are so nice, her man can’t resist going for a quick suck before they head to the shower.

Tying her long blonde hair before stepping, this already looks like it’s going to be the night of his life.

Once inside, she lovingly cleans his cock with her tiny hand, jerking straight to diamond land.

But it’s unfair that her pretty mouth is just sitting there, unused. Gotta fix that.

Teasing the cock with her luscious tongue before feasting on the head, she takes her time to please her guest.

Now that she’s properly cleaned his dick, it’s time he pays her back. She sits on the bathtub’s edge and spreads her heavenly legs.

A pussy made for Japanese girl sex scenes

Her fingers move her lush pussy lips to the side, revealing a pink lustful hole. The guy dives in to devour his meal, stimulating her clit with his tongue while simultaneously licking the perfect lips.

To make sure he stays hard to pound her, she doesn’t let him eat her pussy for too long. Instead she hops in the tub and calls him in to munch on his rod some more.

Done playing with water, their next destination is the bedroom. Nana removes her towel and lies on the bed.

The naked Japanese teen spreads her legs, allowing him to use his pink rotor on her sensitive clit. She starts to moan as things get hot really fast.

Her tight hairy pussy is waiting for some more real action; her man acknowledges that and goes back in to devour it again. Ravaging the delicious cunt with his tongue, she’s soaking wet before she even knows it.

Penetrating it with his finger is simply his way of preparing her for the special sex toy he brought with him, one with a large rotating head and an attached clit stimulator.

The machine destroys her tight pussy, violently stirring her insides. Her lustful sounds of pleasure are undeniable evidence of why she decided to participate in a Japanese girl sex scene tonight.

There’s no reason they should take turns satisfying each other though, they can do it simultaneously. That’s what 69 is for, after all.

The babe spreads her shapely legs and brings her voluptuous ass back for him to dine on her pussy yet again.

On the opposite side, her mouth is swallowing his rock hard cock. Her pretty pink lips sliding up and down the shaft as her hand works the base.

Back on her back, legs spread; he takes no time to tease before shoving his cock straight in.

His pace is slow and gentle at first, as if to get her tight hairy pussy properly stretched by a real cock before destroying it.

This training phase doesn’t last long though. His hips quickly become rapid thrusting machines, driving his cock all the way in, making the babe lose her mind.

He brings her legs together to allow the hard rod to go even deeper, ramming her tight hairy pussy straight into sexual heaven.

Without pulling out, he helps her up as he lies down and they switch positions.

Now on top with the cock still inside of her, she starts to bounce on it with her amazing tits jumping with her.

The nubile teen turns into a sex craving rabbit, sliding her pussy up and down the cock in great speed as she exhales sexual satisfaction.

Her man makes her lean to forward and takes things into his own hands. And by things, we mean her fleshy ass cheeks.

Spreading them to reveal her pulsating asshole, he starts to pummel her hard and deep.

The night of their lives

Nana is now on all fours. Doggy style is the best position for a Japanese girl sex scene and she knows it.

She brings that yummy ass back, asking for her tight hairy pussy to be drilled from behind.

His groin slams her perfect ass cheeks and they erotically jiggle with each bump.

To bring this incredible night to an end, she’s lying on her back one last time, prepared for missionary.

As if savoring every single thrust into her pussy, the pounding becomes insanely sensual, while retaining the same deranged speed. The gorgeous teen is screaming in pleasure.

Every good thing must come to an end. That includes amazing things too, like this night they spent together.

And so, her man fills her tight hairy pussy with his sticky seed, and the warm fluid flows out of her satisfied hole.

Wishing her good luck in her search for a boyfriend, she promises to do her best. And thus ends this diamond-creating Japanese girl sex scene.