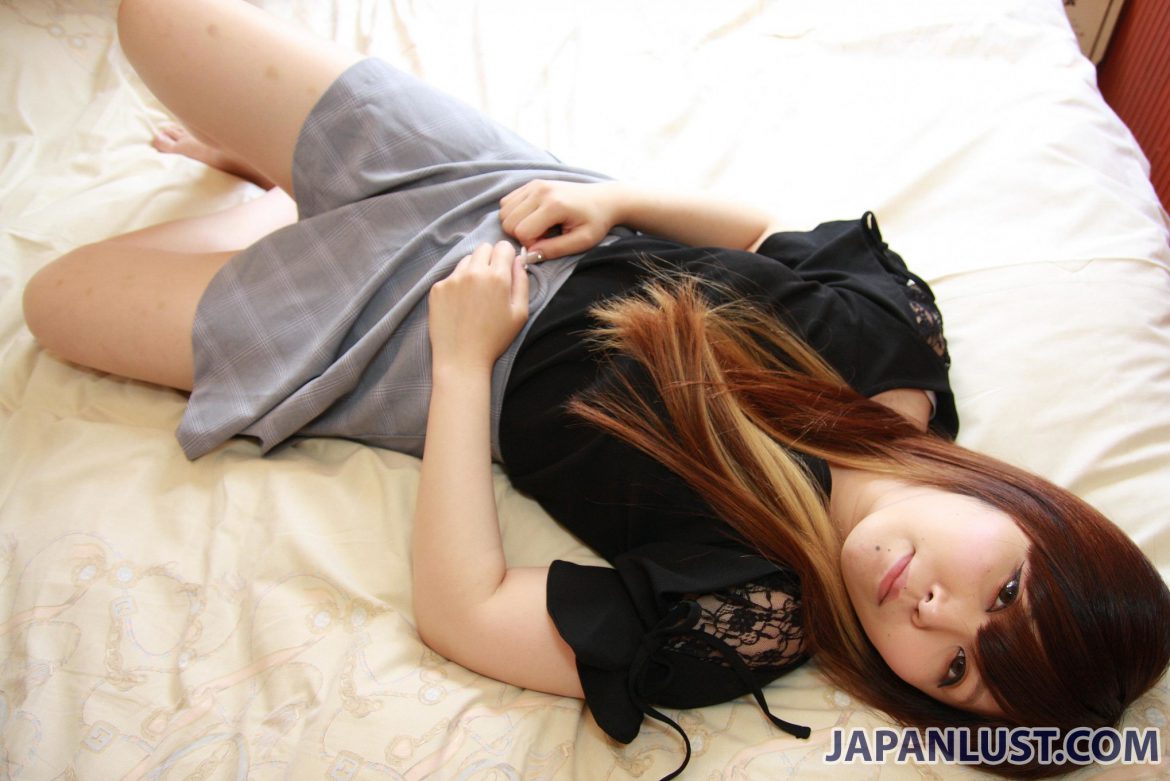 Young Japanese hot brunette Yuma Fukita is trying to explain to Japan Lust why she chose to cheat on her husband with a man she just met on her honeymoon out of all times.

She was a popular slut amongst men in her area right until she got married. Using her good looks to get what she wants is definitely not new to her.

Gracing our couch with her classy black shirt and seductive grey skirt, it’s hard to deny the appeal of the beautiful young woman.

Her poor husband has been trying to satisfy his wife’s incredible sex drive as best as he could. Fucking her every single day of their honeymoon so far, and multiple times on the same day.

Yuma masturbates a LOT, up to three times per day even when she’s getting fucked by her husband by the same amount of times. There is no curbing this libidinous girl’s unstoppable lust.

Her favorite position is cowgirl, she likes to ride her man to climax rather than have him simply take care of her. As for her most arousing areas, her delicate nipples and sensitive clit are probably the easiest target for anyone lucky enough to get some sexy time with this smoking hot babe.

Yuma works part-time as a store clerk. As it turns out, she’s cheated on her husband with dozens of customers.  Going out with them behind his back and getting her hairy pussy drilled and creampied by cocks in all shapes and sizes.

Put simply, husband or not, Yuma is willing to fuck anything with a pulse. Which seems super unfortunate if you’re cursed with being her clueless husband.  Yet extremely lucky to literally every other man blessed with meeting her even as a passerby, and that includes us, of course.

She is possibly the naughtiest, most sex-crazed Hot brunette we’ve ever met. Competing with the massive experience she’s got riding all sorts of cocks will most definitely prove difficult. If not straight up impossible.

We ask her to let us see what she’s hiding beneath her charming yet seductive outfit, and she gladly agrees.

Starting off by very casually slipping her miniskirt off without even getting up, her shirt is next.

Beneath her casual outfit, and in true nympho fashion, is some racy leopard underwear. She takes her clothes off in front of the camera as if she were alone at home.

As for her panties, we get a bit teased as she brings her legs together after removing them. The Hot brunette knows everybody’s dying to get a glimpse of that perfect pussy.

This Hot brunette is also very talented, able to spread her slender legs to a nearly perfect 180 degrees. If this is not one made-for-fucking girl, then we don’t know who is.

The Hot brunette is immediately handed a pink rotor after leaving the shower. It’s clear this is not her first time using one.

Now taking things into his own hands, he drives his finger deep inside of the Hot brunette, violently wiggling it.

Taking him to the bedroom

Yuma knows she can’t just let her guest take care of her like that without any form of reimbursement. She takes him to the bedroom where she has him lie down so she can swallow his hard cock.

Yuma is now on her back. The Hot brunette’s heavenly legs spread as she’s penetrated once more.

Pummeling the Hot brunette like a deranged man as her lustful screams ask for more, his wild speed has already brought him to his limit.